Updates and Save the Date

Posted on July 24, 2019 by Jon at Audubon
Hi Osprey Monitors,
Greetings from Jon, Jessica and Gary! Thank you for all your hard work on behalf of Osprey in RI. We are always trying to improve the program behind the scenes and have a few updates to share with you.
Thank you again for all the skill and hard work you devote to the RI Osprey Monitoring program!
Sincerely,
Jon, Jessica and Gary
Posted in Uncategorized | Leave a comment

When is a nest considered “Successful”? 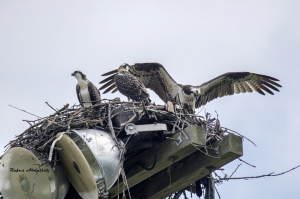 A quick note to reiterate the nest status classifications as defined in this program.   We do our best to understand what you are relaying in your observations and then make conservative assessments based on them.   At this time of year you should be seeing the adults and juveniles in/around the nest and differentiating between the two.  It is important to get a good count now because it becomes more difficult to tell the difference between adultss and fledlings as the summer progresses.

This program is especially interested in the  number of fledglings from each nest.  A fledgling has flight feathers (as opposed to downy) and is capable of flying (fledging) and independent survival.  This time of year is the transition period when the juveniles have their flight feathers and are starting to fly.

S = Successful, meaning fledglings have been observed.  Hopefully flying, and certainly robust and with flight feathers.  This does not include the flightless nestlings seen earlier in the season.   Typically a status of “A” changes to “S” in July when the fledgling count is more certain (some nestlings do not make it).

A = Active, meaning breeding behavior and/or downy chicks/nestlings have been observed.

NA = Not Actve, meaning no breeding behavior was observed. Osprey could have been present at the nest, but no nest building, copulation, incubation or chicks were observed.

UNK = Unknown, meaning the nest status is unclear.  This could be the result of a couple situations: No observations were provided, OR Observations were provided but no clear/certain behaviors to indicate breeding, or no breeding.  UNK is typical early in the season, and with nests that are difficult to see, such as cell towers.  A nest can be UNK until mid July when suddenly nestlings are large enough to see over the nest, on the nest, or in flight (fledging).

H = Housekeeping, meaning some basic breeding behavior was observed but the nest was abandoned.  This is typically seen with juveniles.  Sometimes it may be the case that the pair has left the nest due to a threat of some sort.

NN = No Nest, meaning just that – no nest was present at the site.  Perhaps a bare pole is visible.

HN = Historic Nest, meaning there has not been a nest, or any Osprey, at the location for a few years.  It is important to continue tracking these nests and checking on them as sometimes the nest is resettled.

Thank you again for all your hard work!

It is wonderful to hear all of your nest updates and especially about the fledglings starting to fly! Summer too seems to be flying by, but we are trying to catch up, especially by updating our nest listing map and database to include new nests that were either discovered this year or inadvertently omitted in previous years. Below are those that we are planning to add… please do contact us at rhodeislandosprey@gmail.com if you know of any other nests that need to be included. Thank you so much for all that you do to help the program and the osprey- it is very much appreciated!!!

Author Meet and Greet Next Week!

Posted on July 19, 2019 by Jon at Audubon
Please Note: Unfortunately, the osprey lecture for tomorrow evening at the Audubon Center in Bristol has been cancelled due to lack of enrollment.
Sending out a reminder about this fascinating talk occurring next week at the Bristol Audubon center!
Author Meet and Greet
Ospreys: The Revival of the Global Raptor

The extraordinary revival in Osprey numbers that we are witnessing here in southern New England has not been restricted to our shores. Nearly eliminated from most of Europe half a century ago, Ospreys are staging a remarkable comeback there as well — from Scotland to Spain and France to Finland. Follow local Osprey expert Alan Poole as he leads guests along on a three week summer trip through Europe, visiting Osprey researchers and gathering material for his recently published book: Ospreys: Revival of a Global Raptor. Part travelogue, part natural history, this lecture celebrates the revival of a global raptor. Poole’s book will be available for purchase and signing.

Posted on July 5, 2019 by Jon at Audubon
Hi Osprey Monitors! I am working on updating the nest activity table through June, so please enter all your data through the end of the month ASAP.
On a side note, if you wish to get the contact information of another monitor please run it past me or Jessica so that we may make the introduction. (Unless you bump into them in the field.) Some monitors are happy to socialize within the group while others prefer not to.
Thank you for your understanding. Jon
Posted in Uncategorized | Leave a comment

Please note that the status of the nests shown on the recent Nest Activity table is from observations submitted through the end of May.   If you have seen and/or documented items in early June they were not viewed and would not be included in the table.

Likewise, if you have not entered your observations, or were a wee bit late doing so, I might not have seen your data, so it would not be included.

In early July I will review the observations submitted in June, and will update the Nest Activity table accordingly.  So please try to submit your observations as quickly as possible, and certainly by the end of the month!

Thank you again for all your support,

Posted on June 17, 2019 by Jon at Audubon
The latest Nest Activity table is now available- see link below!
2019 Nest Activity Table
If you spot any errors or omissions, please send any edits directly to Jon.
Note that the nests highlighted in yellow need either an observation or monitor or both. There are a number of nests that remain “UNK” and require a check as well.
The nests highlighted in blue require Jon to perform more research.
Please be sure to enter your observations into the system if you have not already, so we we can keep this table up to date. If you are able to help by checking the nests that require more observations (yellow highlighted or UNK status), that would be deeply appreciated!
Thank you all so much for your help in gathering this data!!!
Posted in Uncategorized | Leave a comment

Nest Activity Through May 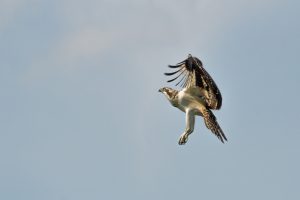 I just finished reviewing everyones’ observations through May and have updated the 2019 Nest Activity Table.  With Jessica’s support it should be posted tomorrow or Tuesday.

I understand that there will be errors and ommissions and ask that you relay any directly to me so that I may correct them.

Several nests have not been monitored to date, or the observations have not been posted.  Please check the list and submit your data as soons as possible.  If you have extra time, you are welcome to check on any of the nests that are missing data.   These nests have been highlighted in yellow on the table.  (The nests highlighted in blue are for me to research.)

Thank you very much for your support of the program!  And keep those pictures coming – they are fantastic!

Greetings Osprey Monitors!  We hope you are having a wonderful summer and enjoying the latest developments at your nests!  Nestlings are now starting to appear, which is so exciting!  This is just a friendly reminder to ensure that you have submitted all of your data into the electronic system.  Jon is working on updates to the Nest Activity Table, which will be going public soon, and we want to make sure we have all of the latest info on the active nests!  Thank you so much!

Watch Out for Bears!

Please be vigilant and remain safe when out monitoring!!! We’ve received an important note from a monitor about the presence of bears near osprey nests!

“As I was leaving the nests at Christofaro Park in Bonnet Shores on Monday, a black bear came out of the woods. I was driving and he went back in. There have been other bear sightings in that area, such as this one yesterday in Narragansett.”